We were actually working so hard this past weekend, that I didn't stop to take many pictures, so you'll have to trust me when I say we got alot done, cause you wouldn't know it from the pictures!

Andy went up early Friday morning to meet the Heating and Plumbing guys. They made the boiler panel off site at thier shop and then brought it up and did the installation in one day. here is a picture of the panel in the shop (Andy says it is a work of art, I haven't seen many, so I'll take his word on that), in place @ the castle. He has it covered and wrapped to keep it warm and protected, and a picture of the pipes coming outside. 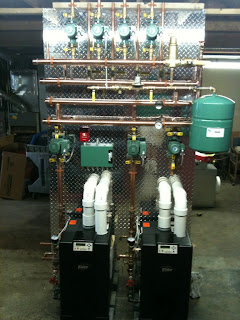 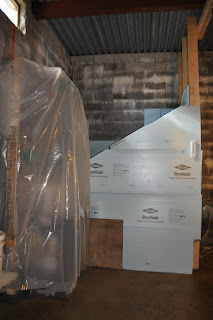 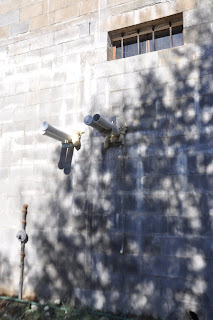 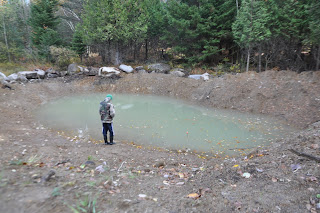 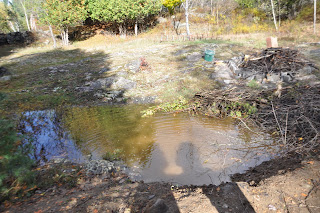 The Ole Grandpa came up for a quick visit and brought a castle warming gift. here are the kids with it. What type of castle does he think this is? It makes lights and noise too, so beware when you visit! 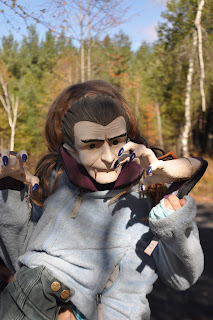 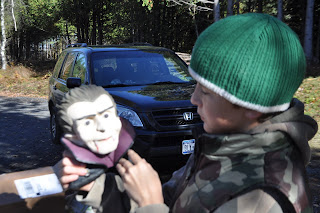 Gandpa's real purpose for the visit was to bring up some plants and seeds and see how they do through winter and into the spring. Here are Rex and him digging, planting, and admiring. 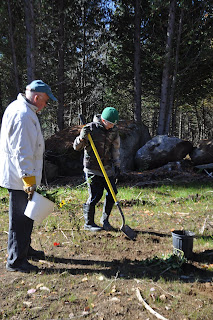 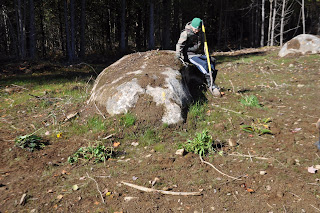 Andy had high hopes to get some more windows openings cut, but putting up the scafolding to do so was as far as we ever got. He pulled the start cord right off the concrete saw and obviously couldn't get it started. he went back to the room that evening and found a "do it yourself" video on the internet of how to fix the cord & first thing next morning he went to hardware store, got what he needed and fixed it. Excellent, so he goes to start the saw the next day and then something happens to the spring. Well, he rememberd in the "do it yourself" video it said if it is a spring problem that we should take the saw in, so we gave up on cutting any concrete for the rest of the weekend & we will be taking the saw in to get repaired. Very frustrating to get everythnig ready and then have that all happen. This is the scafolding and where we were going to cut a bigger window. 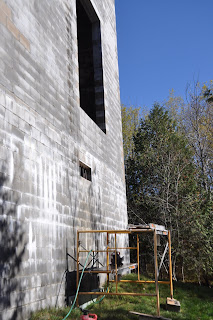 Maria & Dave came up for a day to help us and it was a beautiful fall day, so we thought we'd take advantage of that and have a roof top sunset and champagne break. here is the beautiful fall folliage from the roof. 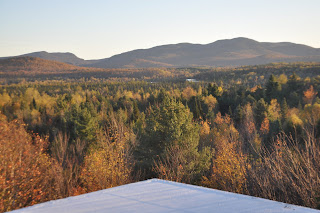 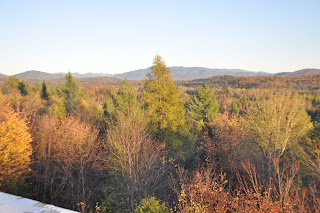 and the champagne with it's fun castle cork! 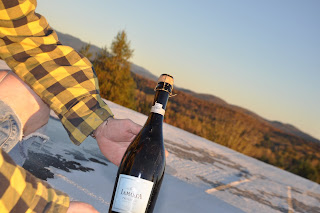 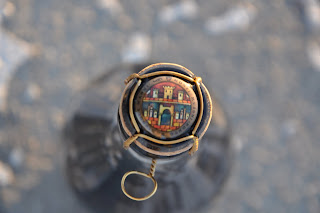 and the sunset! gorgeous! 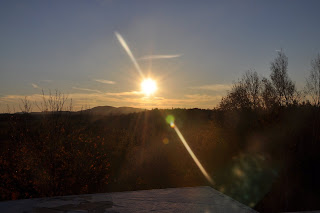 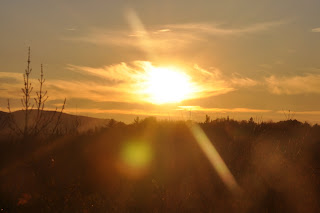 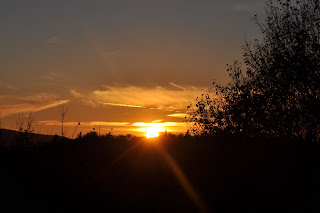 Rex found a new seat on the side of the front hill. It is all fun and games until he leans forward! 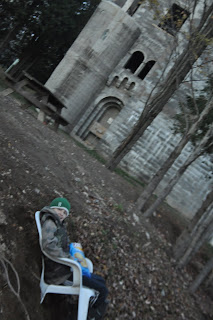 So this is a picture of the first floor, old tool room & what will be part of game room (the dart board is going where that red marking is). But what we were doing in here is putting in 3 columns of concrete block to reinforce the fireplace that will be put in above here in the great room. Andy says fireplaces are very heavy and need extra support. So while this picture doesn't look like much, we had to haul concrete blocks from all three floors above, down to first floor, then we stacked them, mixing cement as we went, and once the columns were up to the window, we filled the first row of them with concrete. That meant setting up more scaffolding for us to stand on to reach the openings at the top. I never took a picture of the columns done and scaffolding in place cause I was the one setting it up and mixing and filling concrete that day. 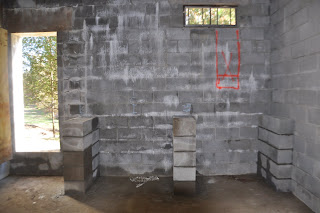 Here is another picture that doesn't look like much, but one that took us an entire afternoon with 5 people working on it. These big timbers were down on first floor in tool room. We lifted them out of there through the back door and then hoisted them up in air against wall and yet more scaffolding. Then we had to shimmy them up the wall and scaffolding into the window on the backside of the castle that goes into the great room. Once there we pushed them in the window and placed them onto this cart. Some of these timbers were 20 feet long and hundreds of pounds, no small task, thank goodness for Dave and Maria. Maria sustained the second injury at the castle during this task. She wacked one of these big timbers into her wrist and experienced pain and swelling, sorry Ms. Maria. 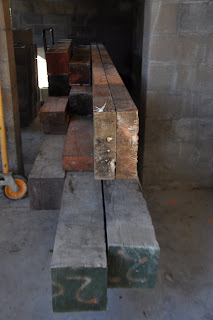 Here are maria and Dave working on a less trying task. We did yet more trimming of trees and brush, this time around the moat area and it is looking good! 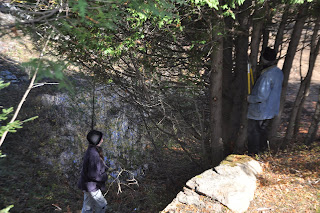 So that was our productive holiday weekend. Andy stayed late on Monday and got numerous holes cut in floors and interior walls for electrical and plumbing pass throughs. he also made some drainage holes in the floors to try and keep it less wet on upper floors.
We'll be back up at the end of the month, might have some new visitors/helpers and Andy has been talking with someone about roofing membranes, so we might be working on that!
and what did you do on Columbus Day?

Posted by Sherie & Andy Ramsgard at 6:57 AM No comments:

We made it into Adirondack Life

Here's the cover of the Special Collectors edition of Adirondack Life that just came out.
We are noted on the cover: "Dream Homes from Medieval Castles to Pondside Homes" 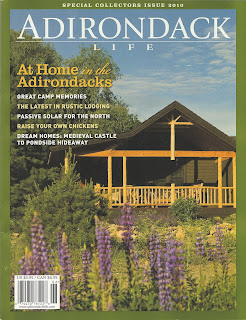 Here is the small spread we got. They are going to follow the progress and do something bigger upon completion. Nice picture! 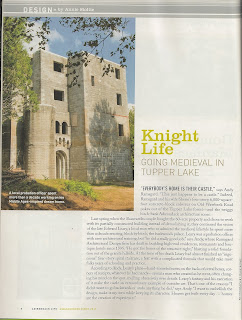 and here is what the article says in case you can't read the fine print. 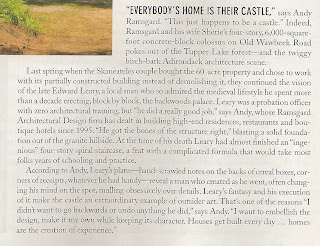 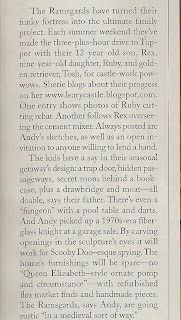 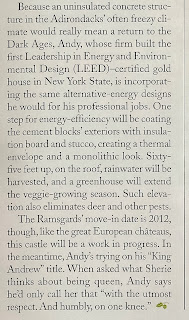 Posted by Sherie & Andy Ramsgard at 6:45 AM No comments: