Getting ready for the photo shoot

So CNY Magazine is doing an Adirondack issue in Sept./Oct. & guess who's Adirondack Castle they wanted to put in it? Yup, ours! I hope they weren't hoping for finished product because we are closer, but still not there. We headed up for the weekend to clean up a bit and meet with photographer. Entering the driveway you immediately see the front lawn to the right of the driveway has been cleared! Nice work Thomas's friend! 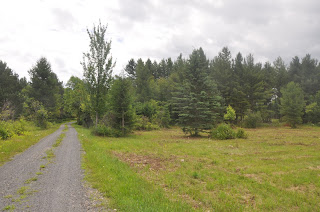 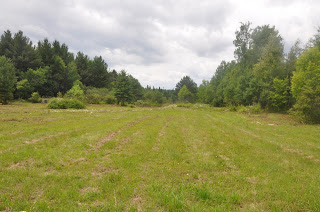 I was excited to see the tile work in the bathroom. This is the bathroom in the Knights bedroom. The tile on the floor in the bathrooms looks like planks of wood, but is actually porcelain, very cool. 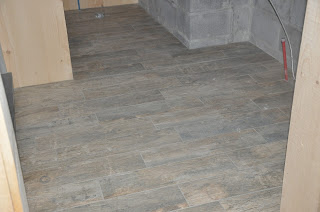 This is a shot into the shower and the corner shelf. 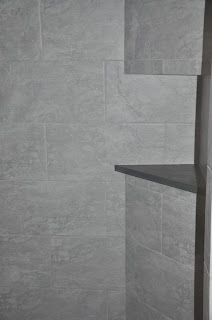 and the stone floor in the shower, love the stones on my feet. Chris has been hard at work putting stone work on entrance wall. He also was able to jack up the right side of the doorway arch so they were same height, which is awesome because we weren't going to bother as we had had enough of that arch. Thanks Chris! Nice treat. 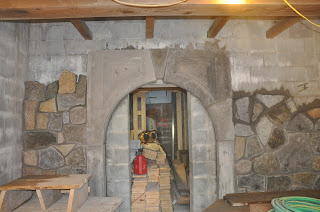 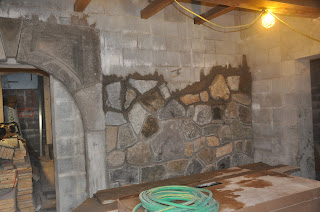 Chris is also making stone stairs into the wine cellar and some ledge seating. 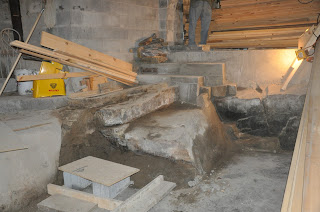 Andy made this concrete base at home and brought it up this weekend to place the fountain we got in Saratoga Springs on it. Trust me when I say it is very heavy. 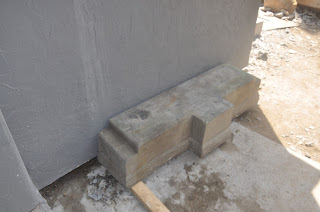 Here's the fountain waiting for its new placing. 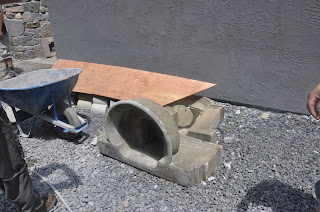 This is Chris's masonry staging area in front of the castle. He's got quite the system going. 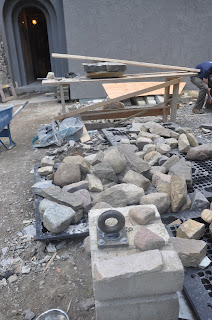 The boys carrying the fountain, this too was very heavy according to all of them. 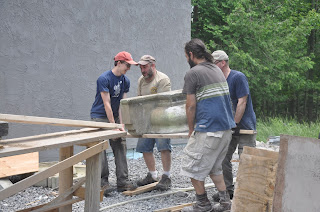 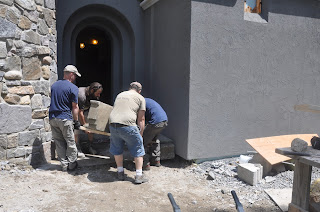 and the fountain in place! Now people can wash their hands before they enter. 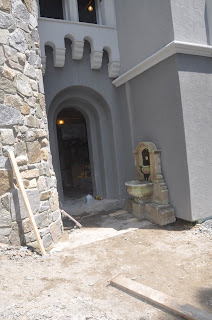 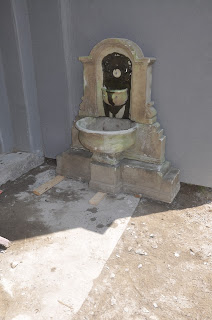 This is taken from the great hall looking up to the Queen's shower. It use to be a doorway sized opening. The guys filled it in and put the arch in. The center is going to be stained glass. 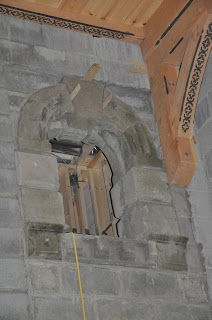 and this is the new Queen's shower window from the shower side. 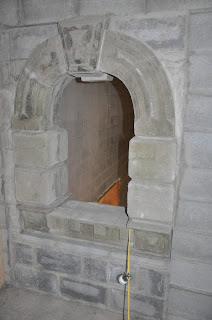 a book case in the library with the doors on it. Awesome design by Andy and awesome craftsmanship from Matteo Bartolotta! 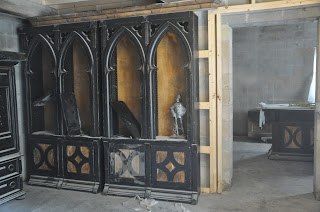 this is taken from the library looking into the kitchen. The island is in temporary position. 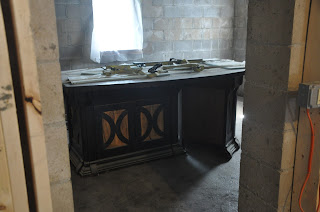 the island in the kitchen. Another Ramsgard/Bartolotta creation. The top marble piece from Roma tile is killer, but was covered and still braced. 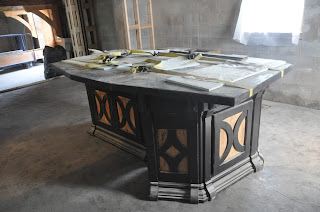 this was taken from the great hall looking into the kitchen. Recall this use to just be a doorway that we opened up to make kitchen bigger and flow more smoothly into the great hall. 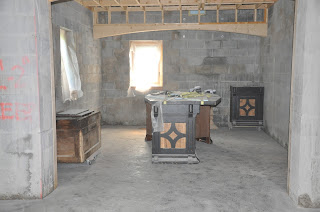 Well, we'll see how my photo's compared to the magazine's photos come Sept./Oct.
Andy met with the Journalist 2 weeks ago and the kids and I are meeting with her tomorrow.

That's all for a few weeks. The boys are off to the National Boyscout Jamboree in West Virginia for a few weeks. We'll be back up at the end of July as we now have to get it ready for the The Adirondack Architectural Heritage tour we are having on Saturday September 28th. The castle will be open, $10 to enter and all proceeds benefit the Adirondack Architectural Heritage. Ed's Sister, Karen will be there. Jim Bombard 's (the original mason with Ed) wife and daughter will be there, and we'll be there giving tours and answering questions. Ed's sister said she found some video of Ed giving a tour of the castle early on and we'll have that available. Should be fun if you are in the area, not to mention peak leaves!
Posted by Sherie & Andy Ramsgard at 7:27 PM 1 comment: