We have heat. While we have been away from the castle for a month the electrician has been busy warming the castle up so we could get up there and work. Even with no windows and just insulation covering the openings it was a balmy 45 inside and we were ready to get back to some real work. 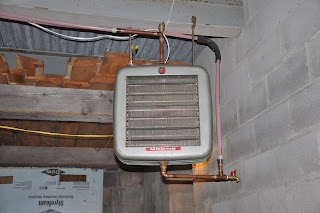 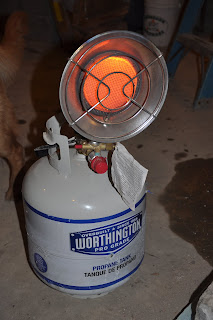 Here is Rex tightening the bolts on the beam we placed back in November. 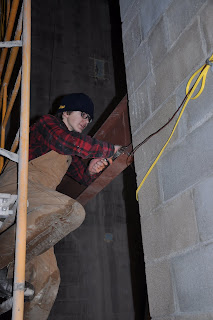 Andy thought it was time to try and get the Sodus Bay arches up and out of the way. He is taking some measurements and thinking about how best to do this. these arches are solid and heavy. 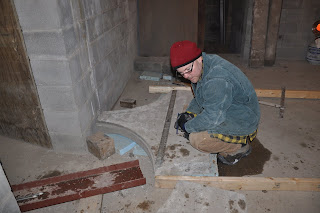 We used the pallet jack to move them into place. 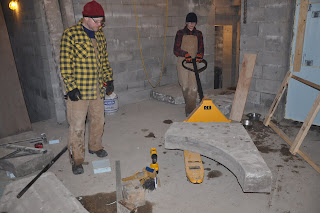 Andy drew sketches on the wall to show us what he was thinking and how he wants them to look. 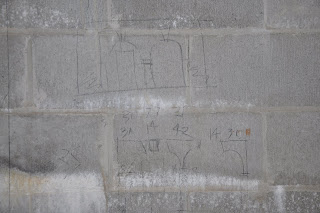 His thought was to build this wood frame, place the arch on the top portion of it and then jack it up to the point where th three of us could push it into place. 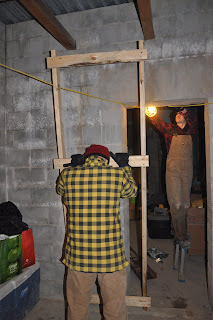 Tosh doesn't like to miss a thing and is always right where you don't want him. 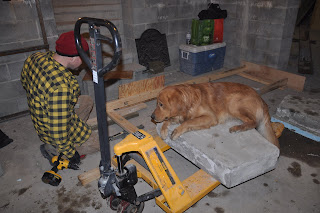 We have started the jacking process here. It was a long drawn out process of pumping, puping, pumping, then replacing blocks, then pumping, puumping, pumping. Do you get the feeling I am not a patient person when it comes to these things? 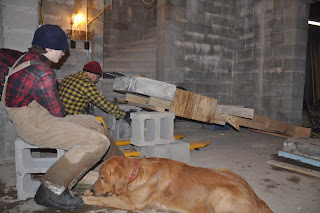 3 and a half hours into it and the arch is going up, but Rex realizes the wooden frame is not going to clear the wooden beams in the ceiling. As we have come to learn, sometimes things you think that are going to take an hour or two sometimes end up taking much longer and sometimes things don't work the way you planned. We took it in stride, chalked it up to a learning experience and Andy went back to the drawing board to figure out an easier way to get these arches up, unfortunately by the time all was said and done it was time to head home, but we knew we had got things in place to continue when we came back in a few weeks.
Posted by Sherie & Andy Ramsgard at 3:29 PM No comments: